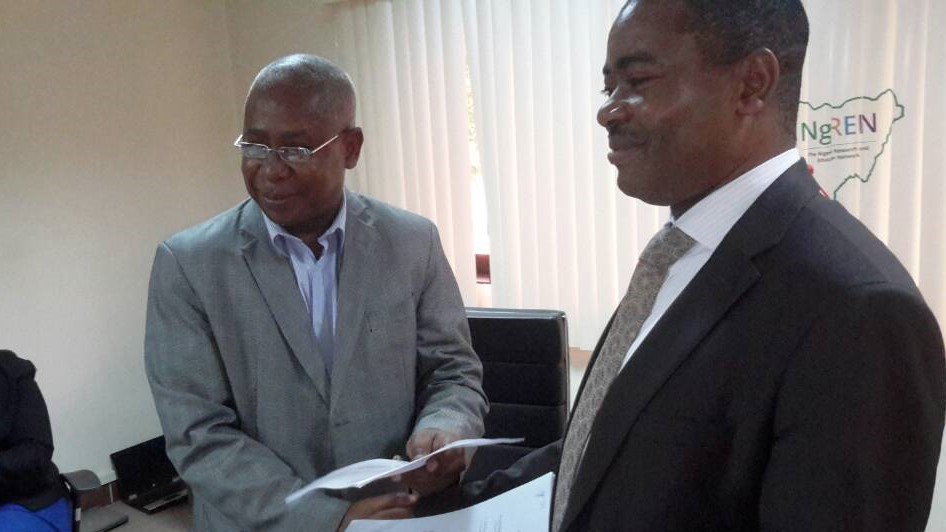 The Nigerian Research and Education Network (NgREN), has once again recorded a mile stone in its efforts of connecting and enabling Nigerian universities and institutions to share resources, communicate, collaborate and partner with member institutions and other countries for effective research and learning, as it signed an agreement  with the West and Central African Research and Education Network (WACREN), in order to maximise the benefits of the 2nd phase of the AfricaConnect Project, (AfricaConnect2). 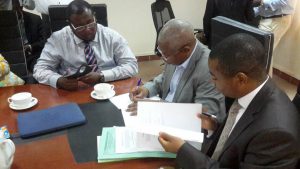 Dr Boubakar,CEO WACREN, Dr. Joshua Atah and Barr. Iyayi  of the NgREN at the signing of the Agreement

Speaking at the brief ceremony, held at the NgREN secretariat, on Monday, 22 May, 2017, the Chairman and Chief Executive of WACREN, Dr.  Boubakar Barry said Nigeria is the 5th country to connect the AfricaConnect2, after Mali, Togo, Cote d’ Ivoire and Burkina Faso. He said that the Project, expected to run from 2015 to 2018 would consolidate on the achievements of the AfricaConnect, adding that Lagos State and the NgREN secretariat would be among the hubs of the project.

Dr. Barry assured that AfricaConnect2 would develop high-capacity internet networks across the entire African continent and connect them to the European GÉANT network, thereby, enabling students, researchers and academics in Africa and beyond to collaborate. He stated that the connectivity would not only boost research and education locally with opportunities like e-learning and cloud computing, but would also benefit scientific studies globally in areas such as climate change, biodiversity, food security, malaria and other infectious diseases.

He expressed the hope that other West and Central African countries such as Ghana, Senegal, etc., would soon join the Network for the overall benefit of their countries. AfricaConnect2, he said, comes at a time when the demand for adequate bandwidth and network services from researchers, lecturers and students at West and Central African higher education and research institutions is extremely high. ‘There is no doubt that AfricaConnect2 will satisfy this demand and benefit the socio-economic landscape in the region’, he added.

Dr. Barry disclosed that AfricaConnect2 involves three sub-regional RENs including,  WACREN, which is building a regional Research and Education  network in West and Central Africa and would connect it to Europe. This, according to him, includes the UbuntuNet Alliance which operates the UbuntuNet network in Eastern and Southern Africa; ASREN which has been connecting Northern Africa following the Mediterranean EumedConnect project and the European networking organisation GÉANT, which has been developing new connections with all pan-African networks, thereby, bringing the Research and Education communities between two continents together.  He also disclosed that the procurement process and other activities were already on-going assuring NgREN that it would enjoy the full benefits of the project.

Earlier in his remarks, the Project Coordinator, Dr. Joshua Atah, expressed delight at the signing ceremony after series of efforts and challenges encountered due to financial constraints. He expressed the hope that with the agreement, NgREN would make significant progress in delivering efficient and effective service to the NUS. According to him, “the signing of this agreement will be the beginning of more progress in this direction. We will demonstrate to all stakeholders what this means”. He used the forum to congratulate the NgREN for this leap in its efforts at ensuring a smooth and seamless interconnectivity among institutions in the country. 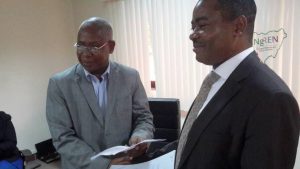 Dr. Atah observed that the success story of WACREN would have been incomplete, without the membership of NgREN, due to the number of institutions in Nigeria. He explained that most universities could not participate in the event due to the short notice, but promised that they would be properly briefed of the new development.

In a Vote of thanks, Mr. Niyi Ilesanmi, thanked Dr. Barry for the visit, saying that the NgREN had made a giant stride in its services,  expressing the  hope that the platform would signify progress for the NUS and be mutually beneficial to all its members.

The signing ceremony was witnessed by staff of the NgREN.